Home Articles Blog A view of the Diver Conference 2013

Introduced by Philip Byers, The DBI 9th Annual Conference 2013 was full of new information about Diver developments, and some excellent presentations from our customers BWG Foods and Polypipe which exemplified the theme of continuity. Both of these companies and indeed the speakers themselves presented at the very first DBI conference in 2005. 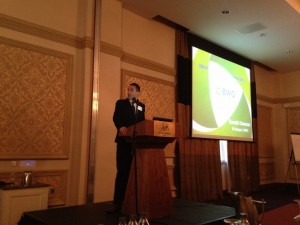 Both have expanded their use of Diver into many areas of their growing businesses, and have found that the Diver Solution has more than kept pace with their growing analytics requirements. Using the latest techniques such as virtual environments, Diveport and Diver for iPad, these companies have demonstrated that Dimensional Insight & the Diver BI Group are listening to, and even anticipating their needs, and will continue to do so for years to come. Bob Corr, MD of DBI welcomed back both speakers and reminded us all that 2014 will be the 20th year of Diver in Ireland, as well as DBI’s 10th user conference.

Apart from the more technical presentations and demos of the latest developments in the Diver Solution, we heard about the DI vision, news and design advice from Fred Powers, the inimitable CEO of DI, who always makes a point of travelling from the US every year to meet the users in our community.

Thomas van Praag, MD of DI Netherlands gave an inspirational presentation about how Diver is being used to help predict and prevent Post Operative Wound Infection, which made us all realise that in some cases, powerful analytics built around “business rules” really can make help to make a difference between life and death (in this case they refer to the rules around the circumstances and the sequence of events in a hospital stay). 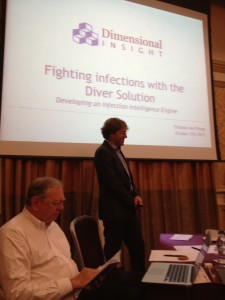 This application is being improved all the time, with more data sources being added one by one to complete the picture – which strengthens the reliability of the prediction of POW infection. Thomas also gave us an overview of the latest developer tools which Alain van den Berg described in more detail later on.

After a very tasty lunch at the Royal Marine Hotel, and a chance to catch up with friends from the UK and Ireland who had travelled to Dublin for the conference, the afternoon sessions included some hands on demos from DBI and the Diver BI group.

The winner for speed and breathtaking accuracy in a demo has to go Olatz Iturbe, from DBI, who managed to demo the process from raw model to markers; time series; parameterised quickviews for both value and time; plus FE entry QV for a mutliplier; and creating a dashboard with Quickviews, indicators and graphs, all in about 10 mins flat!

Alain van den Berg from DI Netherlands had flown in to show us the latest tools in the developer tool kit – Visual Integrator, DI-Production, the new Divemaster and Workbench. So much work had been done since the last conference that it was difficult to find the time to show everything, so he also had to fly through the demo!

John Spillane, CTO of DBI along with YY Tsang of DMBI and the Diver BI Group shared a spot to demonstrate their new application DiveTune which is invaluable for optimising your Diver markers and models. They have managed to condense over 10 years of expertise into an easy to use application that can be run on your Diver server.

DBI’s developers Anthony Wright and Paul Duggan, shared some tips: Anthony on how to add data to map layers using Diver, whilst Paul showed us an example of how we can allow Diver to work side by side with another application, such as Google maps, using the html portlet in Diveport. So simple when you know how!

Peter Wass of Chartwell IT and also the Diver BI Group showed us how he had set up a way of automatically formatting quotations using Diver on data extracted from a Kerridge ERP system, and also followed it up with pdf reminders for sales people to follow up on them. In addition he created a clever Diver application for keeping track of DI-Broadcast emails.

YY Tsang finished up the day with a demonstration of a DiveTab application that he built using the new builder from DI. The speed of building a model and diving into 100 million rows of data was breathtaking! Combine this with Olatz’s speed around Diver applications and we will soon be adding Time Travel Series – back in time! YY also shared some useful tips on how to enhance bubble charts to make them more meaningful.

There seems to be an endless list of new uses for Diver that keep on coming from our in-house developers and Diver BI Group members. It’s almost as the saying goes – “The Sky’s the Limit!”. Keep them coming and next year will be even better! Thanks to everyone who participated. It was great to see you all there.

For more pictures of the conference see our Facebook page: Diver BI Group

Please contact us for copies of any of the presentations.

The past few years have been particularly volatile for the beverage alcohol industry, with many companies forced to abruptly change their business strategies to reflect the new status quo. Increased pressure from shifts in consumer behavior, along with the expansion of e-commerce and the emergence of major disruptions such as the COVID-19 pandemic, have all put serious strain on the traditional three-tier system.
Here we explore ways that analytics can help mitigate the strains. END_OF_DOCUMENT_TOKEN_TO_BE_REPLACED